I use a quill pen a lot in my ink and watercolor illustrations. For years, or as long as I’ve been illustrating, I used the very popular Speedball Crow quill holders and Hunt nibs. I used the “finest” nib (no. 104) because, surprisingly, it offered the most range in line width. I found that I could ink 2 full spreads before I needed to replace the nib with a fresh one. I dipped the pen into india black Calli ink (acrylic-based and waterproof) by Daler-Rowney.

But then, I was reading a book on making comic books (Making Comics: Storytelling Secrets of Comics, Manga and Graphic Novels by Scott McCloud) and there was a reference to some great-sounding inking supplies that are very popular among the Japanese Manga artists. After some hunting on the web, and research on some blogs, I learned about the Deleter brand of Japanese art supplies. The yellow pen holders, nibs and inks are hard to find (they’re not sold at the big art stores like Blick, Pearl, Cheap Joes, for example) but I have found them on-line at BlueLine Pro Art Supply and the new Deleter on-line Manga shop. 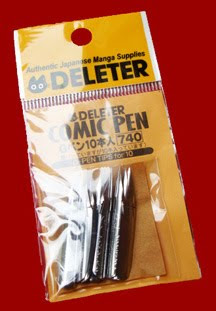 There are three kinds of nibs. I’ve only used the G-Pen nib, but I plan on trying the other two. The Maru-Pen nib is used for drawing thin lines and the Saji-Pen is used to draw “…a variety of lines with pen pressure control.” The nibs are great because they’re so flexible, yet sturdy too – they last such a long time. 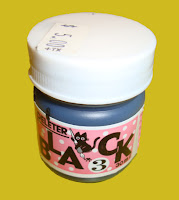 Deleter has black and white inks too. Actually there are 6 blacks and 2 white inks available. Some blacks are waterproof, some aren’t, some are dry matte, some are glossy, etc., I’ve used the #3 ink and it’s worked great. It’s important, I read in a blog, to use the Deleter inks as opposed to other inks because they may be too thick for the nibs.

I’ve recently learned about a new brand of Japanese nibs called Zebra. They’re supposed to be the Excalibur of nibs so I think I need to try them next.